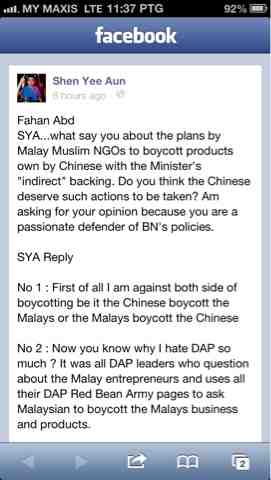 
SYA...what say you about the plans by Malay Muslim NGOs to boycott products own by Chinese with the Minister's "indirect" backing. Do you think the Chinese deserve such actions to be taken? Am asking for your opinion because you are a passionate defender of BN's policies.


No 2 : Now you know why I hate DAP so much ? It was all DAP leaders who question about the Malay entrepreneurs and uses all their DAP Red Bean Army pages to ask Malaysian to boycott the Malays business and products.


No 3 : In life when there an action there will be a reaction. It is because DAP started this race boycotting game that resulting to the Malays and Muslims to also strike to boycott Chinese business and product. Who started it first ?


No 4 : SYA never say the plans by Malay Muslim NGO to boycott the Chinese product is a right thing but at least I am fair enough to look at the root and the cause for this whole problem .


No 5 : Malays and Muslims NGO got nothing to do with BN policy. But boycotting the Malays is directly from all your Pro DAP Facebook pages. Now you saw the differences ?

Email ThisBlogThis!Share to TwitterShare to FacebookShare to Pinterest
Labels: Takut